MORITZ OSTRUSCHNJAK: TANZANWEISUNGEN (IT WON’T BE LIKE THIS FOREVER) 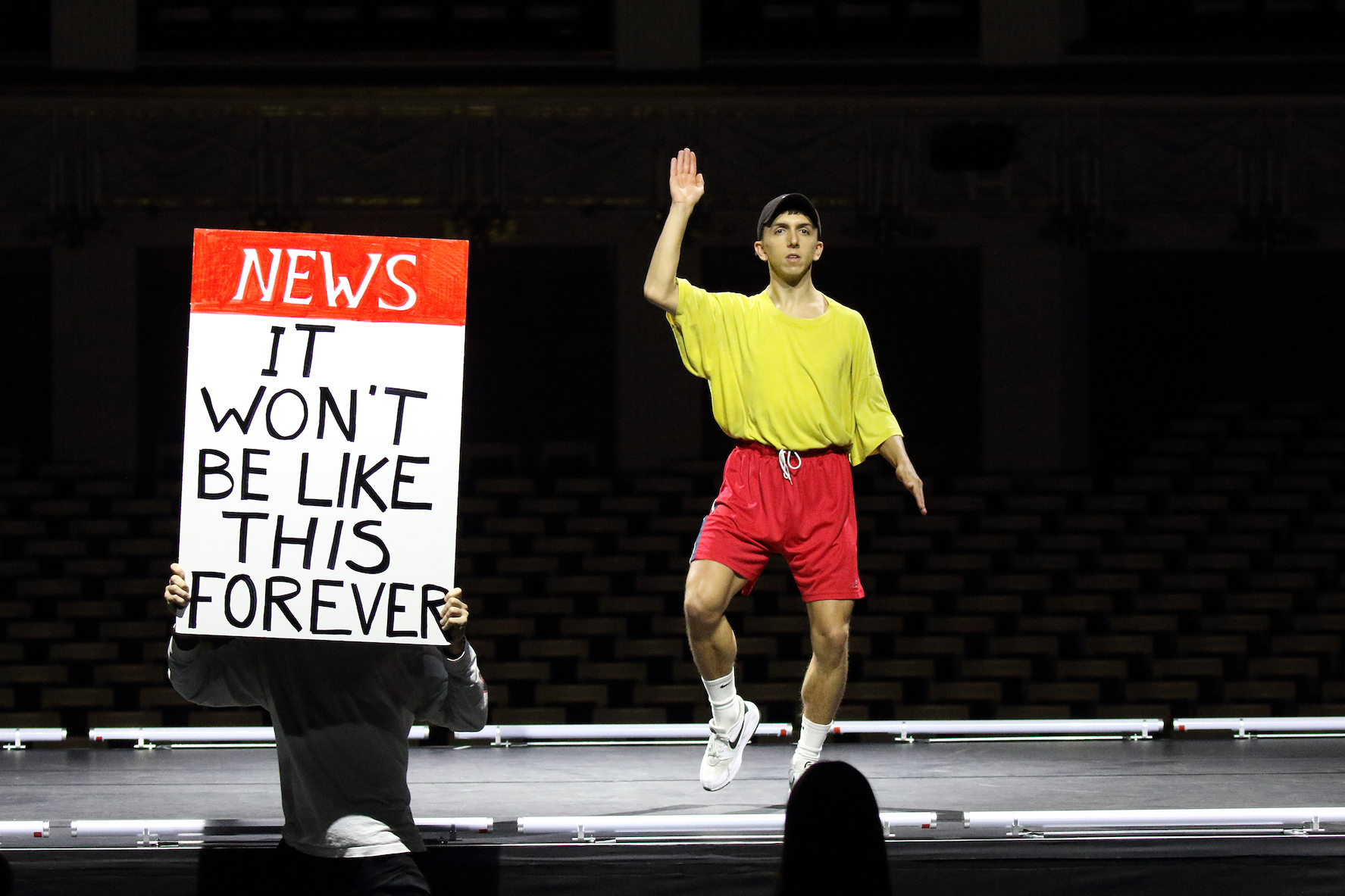 MORITZ OSTRUSCHNJAK: TANZANWEISUNGEN (IT WON’T BE LIKE THIS FOREVER)

It won´t be like this forever – this is what the sign says that choreographer Moritz Ostruschnjak carries across the stage, while dancer Daniel Conant performs a folk dance.
TANZANWEISUNGEN (dance instructions) is full of such self-reflective and ironic references. Ostruschnjaks eclectic style allows his soloist to transition effortlessly from boxing footwork to break dance moves and from a grand jeté to the jump rope; the common element is the sound, the pounding, clapping, breathing, jumping, bouncing that fills the space as a consistent rhythm. As if he had been wound up, the protagonist tirelessly works his way through the extremely diverse canon of movement, assuming poses of resistance, combat and victory, stylized masculinity, youth culture, classic ballet, ballroom dancing and sports in rapid succession – an absurd sequence of divergent elements that overdraw, ironize and contradict each other and that, in combination, playfully yet relentlessly lead into an abyss.

„I always go for the first feeling and then I search and read about it.”

BIO Moritz Ostruschnjak
In his works Moritz Ostruschnjak dwells upon the transformations in physical and social experiences in times of digitization and virtualization. His pieces are spaces made up of hyperlinks which utilize the media-machinery of the 21st century as a motif as well as an archive, thus mirroring and reflecting social processes. Following the principle of pick &amp; mix and cut &amp; paste, highly heterogeneous elements and connections form the narrative of a reality in which the boundaries between politics, entertainment and populism become increasingly indistinct.

As an active member of the graffiti sprayer scene, Moritz Ostruschnjak developed his interest in contemporary dance through breakdancing. He studied at Iwanson International in Munich and completed his training with Maurice Béjart in Lausanne. He has been working as a freelance choreographer since 2013 and created the solo “Island of Only Oneland” and the ensemble pieces “Text Neck”, “BOIDS”, “UNSTERN” and “AUTOPLAY”. His production “YESTER:NOW” (2021)
premiered at Munich’s largest concert, the Philharmonic hall of the Gasteig and in 2022 he realized his latest piece “TERMINAL BEACH”. His works have been performed at many European festivals, the production “UNSTERN” was selected for the TANZPLATTFORM DEUTSCHLAND 2020 and his solo TANZANWEISUNGEN for TANZPLATTFORM DEUTSCHLAND 2022. He is one of the Aerowaves Twenty21 Artists and was 2020 awarded with the Promotion Award Dance of the City of Munich for his artistic work. In 2022 he received the three-year grant from the Department of Arts and Culture of the City of Munich and the three-year conceptual funding of the Fonds Darstellende Künste (Performing Arts Fund). Moritz Ostruschnjak is a member of Tanztendenz München e.V. and has been supported by the network Grand Luxe 2019/2020.